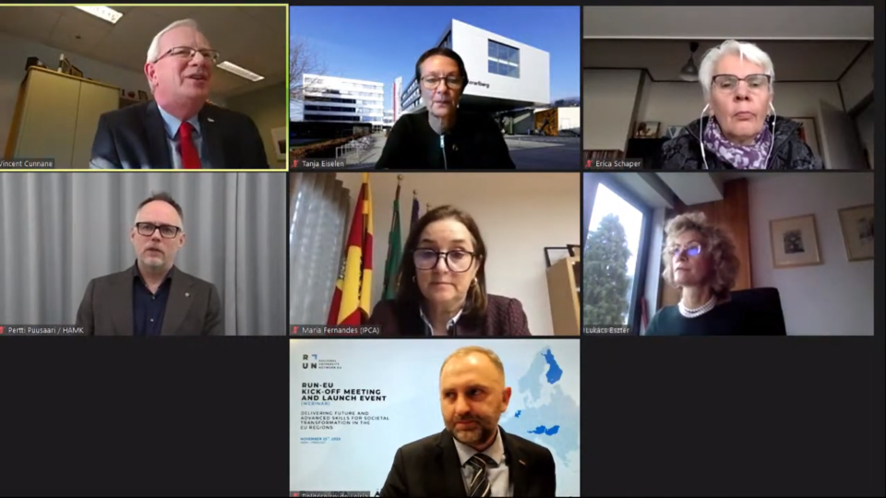 The Regional University Network – European University (RUN-EU) is made up of a collaborative knowledge network with eight multicultural higher education institutions focused on regional development, from six different countries in Europe, in addition to multiple regional and national partners of each of the countries involved. RUN-EU European University strives to promote excellence and innovation in higher education, provide advanced learning and innovation tools, improve the national and international competitiveness of the associated regions, strive to ensure sustainable economic, social, cultural and environmental progress, and become a true engine of regional development.

RUN-EU will deploy an extensive mobility programme for the next three years, with immersion experiences of 1,615 students and 686 international exchanges for teachers, researchers and staff to promote pedagogical development activities, research and the sharing of good practices. During the launch session of RUN-EU, which took place on November 25, in an online format, the president of the Polytechnic of Leiria – Portugal, Rui Pedrosa, presented the work plan defined for the first phase of the European University which, in addition to exchange of students and professionals, provides the creation of more than 80 international advanced courses.

In the next three year, RUN-EU will also create 24 European dual and joint degree programmes at bachelors, master’s and doctoral levels. It is also planned to promote international research and development projects, through the RUN-EU Discovery program, which will involve the mobility of 72 students and 96 researchers in the context of international immersion for researchers. The work plan also includes annual International Student Weeks, bringing together 120 students from all institutions to participate in various programmes and courses and contribute to the discussion on the future of RUN-EU and the European Education Area.

«The European University RUN-EU will be a challenge for the community to think globally. It will be a unique opportunity to offer degrees, masters and doctorates at European level, and to learn from other institutions. Belonging to RUN-EU is not only part of a “Champions League” of European higher education institutions, but also an important strategy for the development of Higher Education and Research and Innovation in the European Union ”, highlighted Rui Pedrosa.

In order to achieve the defined objectives, the activities of RUN-EU will be based on three differentiating activities: the development of Future and Advanced Skills Academies, inter-university academies for the development and promotion of joint learning activities, with innovative methodologies that develop in students the advanced skills needed for the professions of the future; the creation of a European Mobility Innovation Centre that will co-create innovative international mobility experiences for students, researchers, teachers and staff from the eight institutions and promote multiculturalism and multilingualism; and the creation of three European Innovation Hubs that will develop joint research and innovation activities, linked to master’s and doctoral programs, and focused on the industry of the future and sustainable regional development, the bioeconomy and social innovation.

In the launching session, the Portuguese Minister of Science, Technology and Higher Education, Manuel Heitor, highlighted the role that the European University RUN-EU will have in the development of the associated regions. «These institutions have the opportunity here to test and experiment with new initiatives and new forms of learning. It is a particularly important network for Europe, which today faces several challenges in terms of education, namely the need to make higher education accessible to all », said the minister.

For Manuel Heitor, the offer of a diversified higher education system, especially in the regional context, is another of the challenges faced by European countries. «To diversify, specialize and expand higher education, we need to increasingly articulate education, research and innovation. This virtuous triangle can only be realized, in the European context, with institutions that are well connected with the local and regional context, as is the case with the eight institutions that are involved in this network », he stressed.

Under the theme “The transformation potential of European Universities”, the presidents and rectors of RUN-EU shared their views on the impact that the network will have on institutions, students and researchers, and on all employees, being from the perspective of all the impact of the project in terms of mobility, regional development and the potential for sharing learning and skills.

“The European University will allow our students to have access to unique programs and activities, something that our institution values ​​a lot”, began by referring Vincent Cunnane, President of the Limerick Institute of Technology (Ireland). Erica Schaper, President of the NHL Stenden University of Applied Sciences (Netherlands), highlighted the opportunity to participate and work on international projects. “We are very happy to have the possibility to work together with the other institutions and to give our students the opportunity to exchange through Europe, without forgetting the contribution that this network will make to the development of the regions”, she reinforced.

The President of HAMK University, Pertti Puusaari, pointed to European Universities and RUN-EU as “the most important higher education project in Finland and, perhaps, in Europe”. «It is a network with great potential. Together, we want to be very competitive », he assured. Also the Rector of FH Vorarlberg (Austria), Tanja Eiselen, stressed the importance that the project will have in the development of advanced skills necessary for the professions of the future. “It will be these skills that will allow us to solve problems, like those we face in a pandemic context. With this network, our students and professionals have the opportunity to acquire tools that, in the future, will contribute to the competitiveness of our region », she underlined.

Ciarán Ó Catháin, President of the Athlone Institute of Technology (Ireland), and Eszter Lukács, Vice-Rector of Széchenyi István University (Hungary), were enthusiastic about the approval and the beginning of the European University. “All institutions are committed to developing programmes and research that promote the development of the regions. We are looking forward to seeing the impact that RUN-EU will have”, said Ciarán Ó Catháin. “The participation of regional and national associated partners will be decisive. In this context, having Audi Hungary involved in this project is an excellent opportunity for many of the activities of RUN-EU,” highlighted the Vice-Rector Eszter Lukács.

The President of the Polytechnic of Cávado and Ave, Maria José Fernandes, highlighted some of the priorities that will be on the institutions’ agenda, namely pedagogical innovation, the availability of courses at European level, development advanced skills, the creation of European laboratories, among others. «For our institution, belonging to RUN-EU is taking a step towards reinventing ourselves and reinventing what we do and the way we do it. We are ready and committed to contributing to the development of this partnership », guaranteed Maria José Fernandes.

The launch session of RUN – European University had also a panel made up of students from the network, who made a presentation on “Student commitment and involvement in European Universities”. After this debate, there was a panel discussion with the government representatives of the six countries involved, entitled “Member States’ support for European Universities”. In this context, Minister Manuel Heitor argued that “it is important to join efforts to articulate national support and the different sources of European funding”. “It is important to understand how governments can support these partnerships between institutions, particularly when several challenges are on the table, such as obtaining European double/multiple degrees, and the respective accreditations”, stressed the Minister of Science, Technology and Higher Education in Portugal.

Directly from Austria, Gabriela Dür, responsible for Science and Higher Education in the State of Vorarlberg – Austria, stated that she is convinced of the contribution of RUN-EU to “open up new perspectives and opportunities, not only for higher education institutions, but also for regions, for the development of societies, for the economic sector and for the culture of institutions and the country”.

The Deputy Director-General of the Ministry of Education and Culture of Finland, Birgitta Vuorinen, started by saying that the Finnish government has a “very special relationship with this initiative”. “Higher education and research are two of the most important investments that Europe must make. It is the future. With digital development, countries increasingly need qualified people. We need to make higher education in Europe the best in the world, while respecting the educational diversity of all European countries”, defended Birgitta Vuorinen.

Sophie Duijser, representing the Netherlands Ministry of Education, Culture and Science, said that the Dutch government looks to the European University as “an opportunity to establish networks across Europe”. Also the head of the Higher Education department of the Hungarian Ministry of Innovation and Technology highlighted the contribution of the European University RUN-EU to “increase the international competitiveness of Hungarian higher education institutions”. “Above all it will facilitate the integration of Hungarian higher education, not only in European higher education, but also in the area of ​​research and innovation at European level”, said Laura Sinóros-Szabó.

Representing Ireland, the Minister of State for Skills and Higher Education, Niall Collins, stressed the importance of the alliance for “the advancement and growth of higher education, especially at the regional level, which is a key government commitment and objective Irish and other European governments’.

Niall Collins, who closed the launch session of the European University, also took the opportunity to recall the common objective of all institutions and all governments involved in the project: “Improving our communities, our regions, our countries and, consequently, the European Union. Our strength is in unity. In order to be competitive and survive globally, we must constantly improve. And, certainly, that this initiative will contribute to that common goal”.